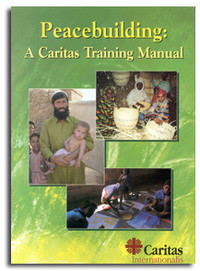 The present first decade of the new century has started the third Christian millennium proposing, on a large scale, a both well known and tragic custom of thought, marked by strife, not only as for those conflicts that, in past decades, have not found a proper solution, but as well starting new and disquieting wars, such as the ones in Afghanistan and Iraq.

In these same years we have witnessed, though, the revival of a collective consciousness, able to stir up vast mobilizations, in public squares, factories and firms, in schools and ecclesiastic communities, on some occasions even in private homes …, on balconies, painting our towns with the colours of the rainbow, an ancient and biblical mark, set by God to symbolize a permanent pledge of peace between Heaven and the earth, and among all it’s children.

We are well realizing, though, how it happens that every day’s worry and fatigue are a constant threat to the most sincere and generous impulses, most of all in a context permeated by a logic of “snap and go”, when even the strongest emotions can, in a few moments, be inescapably cancelled by habits and by a sense of yielding helplessness

More than that, we know all too well that, in a world ruled by media, only those news that receive the best attention from the diffusion organs can reach the dignity of “existence”, while huge tragedies are sentenced to leave no track, simply because they have been ignored.

All the more, if we push our attention on a wider range, we can find out the existence, worldwide, of a “grey” zone, occupied by the so called “low intensity conflicts”. We have there, rather than proper fights, a series of continuous vexations, of systematic offences to human rights, of permanent structural abuses, such as to offend people’s human dignity and personal safety, just the same as it happens in formal situations of war.

These unbearable situations, as well as the wonderful yearn for peace meandering everywhere and the growing involvement of many ecclesiastic communities, who do not surrender to the inescapability of war, nor accept the existence of two series of wars: A and B, all this has encouraged us to elaborate this project, for a “Permanent Observatory on neglected conflicts”.

Caritas Italiana and Pax Christi Italia started this project in 2003, on the occasion of the celebrations for the XL anniversary of the Encyclical Pacem in Terris, with the aim to continue and confirm their engagement regarding armed conflicts and their tragic consequences. The project has the aim to strengthen their activity to improve information, mainly regarding the missionary and pastoral world, and to play an educational role, preparing the basis and conditions for the development of awareness about anything threatening peace and any signal of hope showing in conflict situations.

The Observatory plays a role of continuity with the Research on neglected conflicts, started by Caritas Italiana in collaboration with “Famiglia Cristiana” and “Il Regno”, developing the outcome from a role of report into an active and responsible engagement, obviously enjoying from the experiences and the international network related to the two promoters.

Besides detailed information on various conflicts, one can find in the present pages various animation tools, for communities’ pastoral and for the development of an education for peace, and for an engagement towards it.

Finally, the Observatory means to be a simple but efficient tool, for the building of Peace, starting as well from a deep analysis and report on the hidden reasons for poverty, as for the duty assigned us by Pope Benedictus XVI°, on the occasion of the XLII° World Day for Peace, on the 1° January 2009